But this time, we’re here for the beer. More precisely, the microbeer: the crafty, flavorful alternative to the mass-produced product proffered by the international brewing industry. In the last 20 years, microbreweries seem to have popped up on every street corner in America. I can walk to three of them from my home office. But brew-hopping, we figured, would be better in a boat. An opportunity materialized on the new Afina 3950, moored in Jacksonville, Florida, on the St. Johns River right down from the River City Brewing Company. As we still say in Wisconsin, let’s go for the gusto!

The Afina 3950 turned out to be an ideal craft for this outing because its glassed-in salon kept us out of the rain during a typical summer-evening Florida shower, and because it came with a designated captain. (We run on a zero-tolerance policy at Boating.) It would be hard to pick a greater city for boating than Jacksonville, which flanks the mighty and north-flowing St. Johns River near where its mouth dumps into the more-mighty Atlantic and offers further opportunity for general plunking around in numerous coves and small tributaries to the main river.

Operation Dry Water: If the helm is your responsibility, stay sober. It’s that simple. According to the U.S. Coast Guard, alcohol use is the leading known contributing factor in recreational-boater deaths. Consider the consequences suffered by Orange County, Florida, resident Mark Watts, whose 2006 BUI accident killed a 20-year-old woman on Lake Irma and sent him to prison for six years. “What I’ve gone through couldn’t compare to parents losing a child,” Watts states in a public service video produced for Operation Dry Water, a year-round boating-under-the-influence awareness and enforcement campaign of the National Association of State Boating Law Administrators. “You don’t want to be me. Take the time to think about consuming alcohol and operating a boat.” Check out the powerful video and the website at operationdrywater.org.

Jacksonville is also a beer town, home to a 1-million-square-foot Anheuser-Busch Inbev SA suds factory that daily cranks out 235 truckloads — or reportedly 9 million barrels annually — of Budweiser and other maxi-brews. Now, I’m from Milwaukee, so I ought to know that the Bud factory is not what we were looking for. We found the good stuff on downtown Jacksonville’s Southbank at River City Brewing Company, where the Afina snugged up to the bulkhead with ease thanks to its Mercury Axius Joystick Piloting controls. We were welcomed by the River City staff, including 76-year-old brewmaster Bob Grandstaff.

River City claims to be the oldest microbrewery in the Jacksonville area, having tapped its first barrel in 1993. Grandstaff has been on duty since 2003. He once worked across the river at the Budweiser factory, where he was a quality-control manager and learned the craft, albeit on a much larger scale.

“This is a lot more fun than the large brewery,” Grandstaff says. “I get to be more creative, and I enjoy dealing directly with our customers.”

Grandstaff supervises the production of 200 barrels of beer annually, which puts the operation on the small end of the microbrew scale. The industry defines a microbrewery as one producing less than 15,000 barrels a year. That’s still a lot of beer, but considering the Jacksonville AB plant produces about 25,000 barrels a day, you gain perspective. Grandstaff told me that when he started at River City, there were four beer recipes produced year-round, plus an occasional seasonal beer. The bar now has eight recipes and seven taps, and he produces more seasonal varieties. One of his latest creations is Kentucky Bourbon Ale, which is aged with pieces of oak soaked in bourbon and, at 14 percent ABV (alcohol by volume), has a real kick. The signature River City brew is Red Rooster, one of the brewery’s original beers, which is created with four select German malts and toasted wheat. The result is a dark beer with a nice balance of bitter and sweet.

The brew hall is in a glassed-off room adjacent to the bar area with a classic 14-barrel copper brew kettle. On the floor above are fermentation tanks and a storeroom where Grandstaff showed us nine different types of German malted barley and wheat and imported and domestic hops. The finished beer is stored in a 34-degree cold room, and once it crosses that threshold, it’s taxable, according to a sign on the door. Grandstaff has to account for every drop.
River City Brewing is only allowed to sell beer on premises, and the taps are piped straight from that cold room. Beer could not be any fresher. As we lingered on an upper balcony and watched the lights of downtown Jacksonville glow in the twilight and reflect off the river, Grandstaff pulled us samples — generous samples — from the adjacent and empty upstairs bar. You can have the King of Beers, I’ll take another Red Rooster on the water.

The Afina 3950 was born out of frustration. When Wayne Floe, founder of Minnesota-based Floe International, couldn’t find just the right boat, he designed his own. Now his dream boat, the Afina 3950, is in production as a semicustom with a price of about $500,000. And there is really nothing like it on the water. At first glance, this 39-foot-6-inch-long, 11-foot-beam fiberglass craft looks like a big deck boat with a house on top. Designed to stretch the season, the Grand View Cabin can be completely enclosed or opened up in various stages — open the forward and aft doors, roll down the huge side windows, and roll back the soft-top section. On the day we ran the Afina from Jacksonville to Fernandina Beach, we opened all the glass but kept the roof closed for shade, and we were very comfortable on a 90-degree day and enjoyed the bright, airy house area with great views all around. Heat and air conditioning allow the owner to further manipulate the environment and the comfort of guests. There’s a galley in the main house area, a head compartment forward to port, and access to a berth area forward of the helm. A pair of 430 hp MerCruiser Bravo Three drives pushed this inverted V-tunnel hull to a top speed of 48 mph. 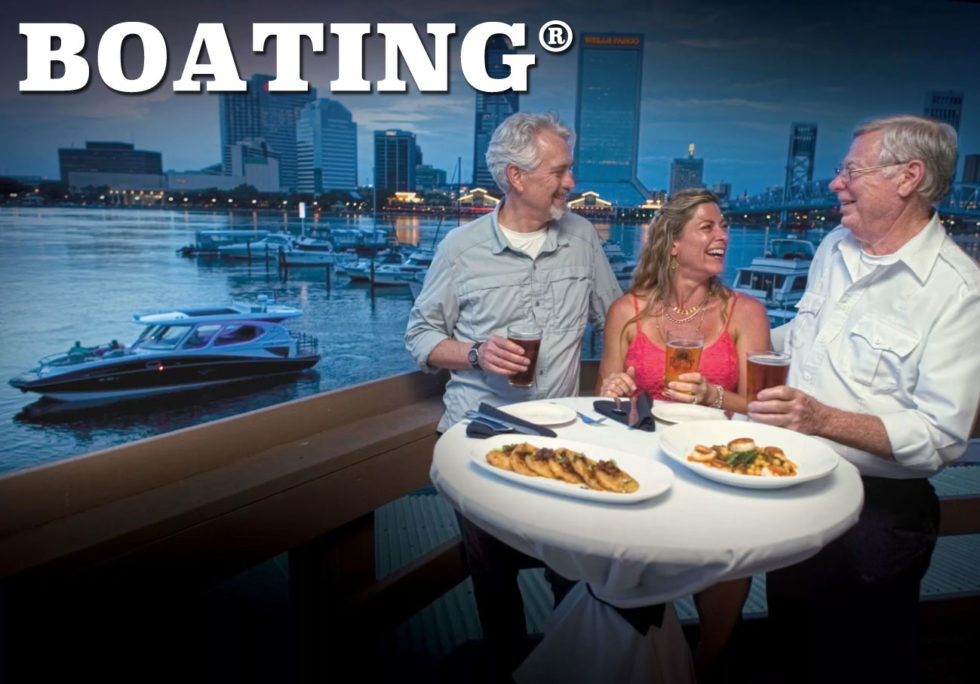 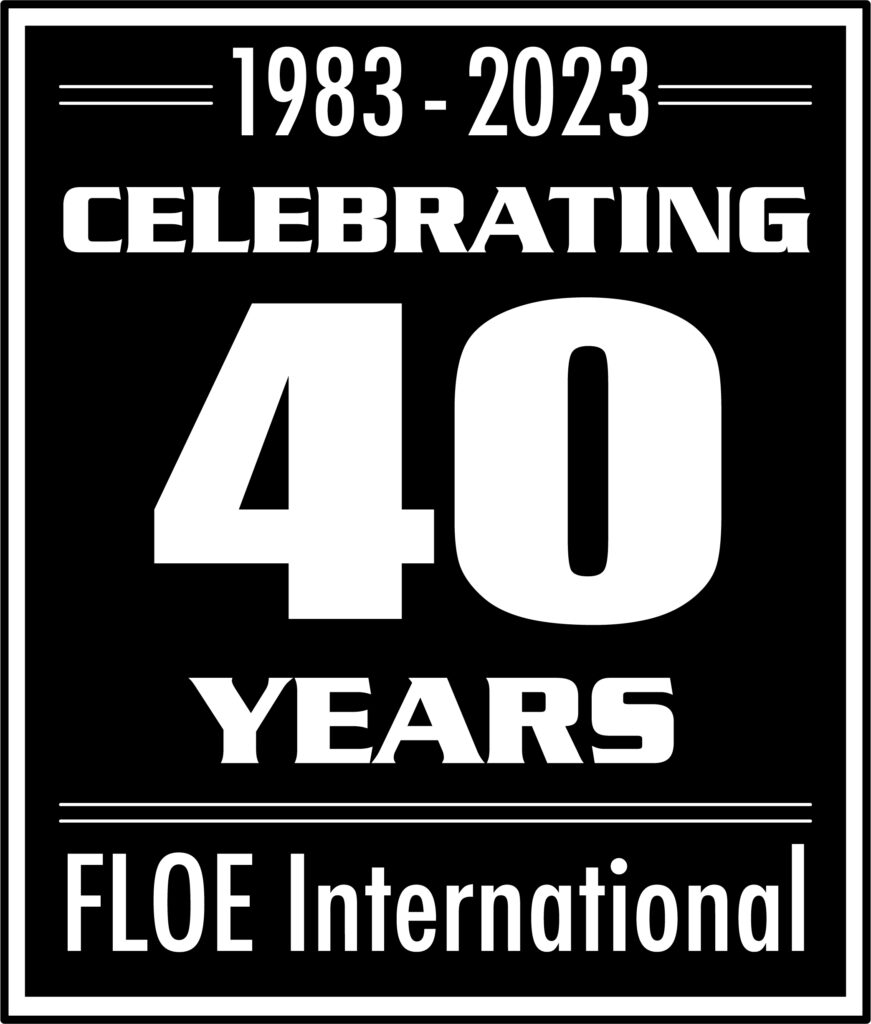